John Constable is a writer and performer, who has lived and worked in Southwark, London, for more than 30 years. A graduate of Queens College, Cambridge, in 2010 he was awarded an Honorary Fellowship by London South Bank University (LSBU). He has given hundreds of performances, talks, walks and workshops exploring the secret history of London.

John has presented talks on history, literature, art and magic – for LSBU, the London Borough of Southwark, the Being Human Festival, Breaking Convention at Greenwich University, and at festivals ranging from Glastonbury to Latitude.

He has created and conducted walks for his own Southwark Mysteries group, for statutory bodies, businesses, schools and community groups. Along with his public walks, John conducts bespoke walks for corporate hospitality or for team-building exercises.

A selection of his most popular walks was published in his book Secret Bankside: Walks In The Outlaw Borough.

Packed with fascinating social history and local lore, these walks are witty, insightful and hugely entertaining, evoking the spirit of the oldest and most colourful part of London, and taking in famous landmarks along with some of the ‘secret’ treasures hidden in the back-streets.

John’s walks focus on Borough, Bankside, Elephant and Castle, Bermondsey, Rotherhithe and Canada Water, though some walks take in The City of London.
Among his most popular walks are:

THE OUTLAW BOROUGH – exploring Bankside’s medieval Liberty of the Clink, which lay outside the law of the City of London, where the ‘Winchester Geese’ (sex workers) were licensed by the church yet buried in the unconsecrated Cross Bones Graveyard.

SHAKESPEARE’S BANKSIDE – the Bard and his contemporaries: the story of how English theatre was born in Southwark’s Elizabethan red-light district.

THE GHOST WALK – haunted pubs, a Borough magician, a female gladiator, Cross Bones graveyard and the spookiest stretch of the Thames.

THE MYSTERIES PILGRIMAGE – the secret history behind The Southwark Mysteries, enlivened with John’s performances of poems from his best-known work.

NEW TROY: A WALK IN THE CITY OF LEGEND – myths and legends of The City of London: the head of Bran buried at the Tower of London, the Gog-Magog giants and the ‘Trojans’ who were popularly believed to have founded the old City. 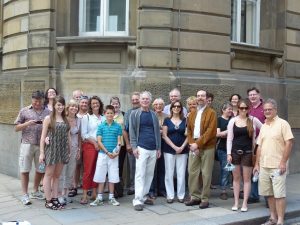 The Portuguese Ambassador attended John’s ‘Restoration Walk’ for The City of London Festival.

For information on John’s public walks, please revisit this page and the Events page.