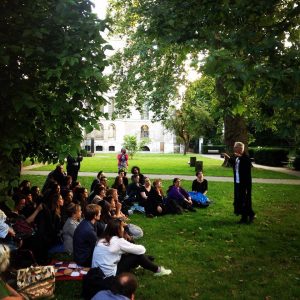 It was performed in the churchyard of St George In The East, a Hawksmoor church. Now we’re reviving the show for this one-off online production.

‘UNRIPPED’ explicitly subverts the fetishisation of ‘The Ripper’, dismissing ‘Jack’ as a pathetic, inadequate, cowardly serial murderer, whilst celebrating the lives of his so-called victims as real women, daughters, lovers, wives and mothers. Some of these women chose sex work as a way of earning a living, others may have turned a trick when needs must – there was much more to their lives than is suggested by the lazy, dismissive, catch-all term “prostitute”. 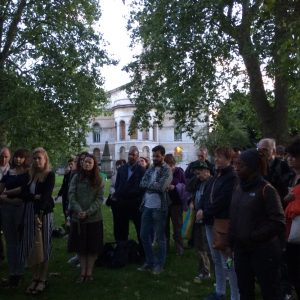 Vanessa tells the story of Catherine Eddowes, an orphan girl and free spirit. We set the lives of the murdered women in the context of the hypocrisy surrounding our attitudes towards sex work, whereby the whore becomes the recipient of all the contrary desire and disgust in a sexually repressed society.

Relating this to our work at Crossbones Graveyard, John Crow performs ‘The Book of The Goose’ and conducts a simple participatory ritual to honour the ‘women of Whitechapel’. We’ll all light candles and offer flowers in a collective act of remembrance and healing.