At 7pm on the 23rd of every month since 23rd June 2004, we’ve gathered in the street by the Crossbones shrine in Redcross Way – to honour the Outcast, dead and alive; to renew the shrine; and to reclaim the Secret History as revealed by The Goose to John Crow on 23rd November 1996. 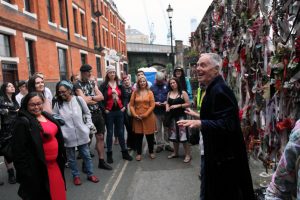 The Vigils grew out of The Halloween of Crossbones, a ritual drama to honour The Goose and her Outcast Dead, conducted every 31st October from 1998 to 2010. This was itself an expression of ‘The Southwark Mysteries’ by John Constable, an epic work of poetry, songs and ritual dramas of healing and transformation.

On 23rd November 2019, John Constable (aka John Crow) conducted his last official Vigil, having completed 23 years of magical works at Crossbones. Since then, a Magical Collective of Friends of Crossbones has carried on holding the Vigils every 23rd. 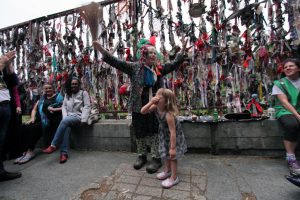 23rd June is St John’s Eve, the traditional English midsummer festival, a time when people used to jump over bonfires, both literally and symbolic act of purification. At this Vigil we’re sensitive to the summer solstice, when light and dark are held in balance.

Depending on the highly volatile state of the national health crisis, some of us may or not be able to gather at the shrine in Redcross Way. Even given the easing of restrictions, those at high-risk may still feel it’d be unwise to join the often large crowd at Crossbones. 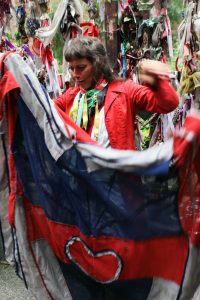 For the last three months of lockdown, people from all over the world have participated in Spirit, creating their own altars and conducting the rituals in their own homes, co-creating and reiterating the spiritual identity of The Goose and the Crossbones Vigil on The Astral. You’re invited to do so again on 23rd June.

During this period, Mark Juhan has done a livestream of him conducting the ritual from his garden in south London. This month, John Crow will do likewise, live-streaming as he conducts the Vigil at his home altar, only a short walk from Crossbones. This is for anyone who can’t get to the Vigil physically and would like a live connection with the rituals.

To help those who’d like to fully participate, with or without the livestream, here’s our basic ‘order of service’ – with opening, 3 ritual observances and closing. When conducting the ritual, the aim is to get out of the way, allowing The Goose to work her magic through you. Do it at your own altar and be part of it all. Like this:

‘Spirits of The Dead, Spirits of the Living, Kindred. Welcome!’

As you say these words, be aware that you are connected with all Spirits, incarnate and disincarnate, and with the transforming agency of The Goose, in this act of mutual healing taking place within a single, undivided consciousness.

Remind yourselves that Crossbones is a pauper’s graveyard, the final resting place for the sex workers (Wichester Geese) who worked in brothels owned and licensed by the Bishop of Wichester in Southwark’s ‘Liberty of the Clink’. Thanks to our work over the past 23 years, this once despised, desolate site has become a holy place for pilgrims from all over the world – a shrine and a garden of remembrance ‘for the Outcast, dead and alive’

2. Hold the candle for one minute’s silence, as you imagine lighting the open pathways for all beings to make their individual journeys. It helps to cultivate a state of “shining emptiness”, in which all sounds, sights and other sense impressions can arise and vanish, with nothing for anything to attach to.

3. “Binding and loosing”. Imagine tying a ribbon to Crossbones Gates. Invest the ribbon with all that you would wish for yourself, and as you tie it, release that blessing for others, saying five times:

“Here lay your hearts, your flowers,
Your Book of Hours,
Your fingers, your thumbs,
Your “Miss You Mums”.
Here hang your hopes, your dreams,
Your Might Have Beens,
Your locks, your keys,
Your Mysteries.”

4. Bardic offerings.
Perform a short poem or song from ‘The Southwark Mysteries’, or something of your own dedicated to The Goose – or to celebrate midsummer and St John’s Eve.

5. Closing.
Close the ceremony with a libation of gin. Say:

“Life! Health! Happiness! Open Pathways!
Health in the Body.
Peace In the Spirit.
Love In The Heart.
It is this that we wish,
for ourselves,
for our friends and family,
for all our Brothers and Sisters,
for The Goose and The Crow,
and for all Humanity.
May it be so.”

And so she does…