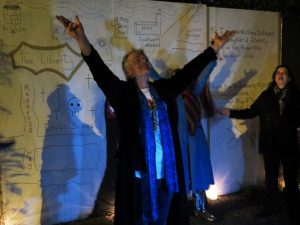 Photo by Max Crow Reeves: The Halloween of Crossbones 2016

In 2010 we completed the magical cycle of 13 annual performances of The Halloween of Crossbones, which began in 1998. We revived it in 2015, when we danced with the dead with Wolfshead & Vixen GOTH MORRIS, and again in 2016, when Jacqueline led a silent communion with the spirits. We’d only do it again in the most exceptional circumstances. We now perform our rites for the outcast dead at the Crossbones Vigil / Halloween Portal every 23rd October. For friends who miss our samhain shamanigans, here’s Andrew Logan’s exquisite film of The Halloween of Crossbones IX (2006) back in the wild days when we could still party in the ‘Drome’ caverns under London Bridge.

The film ends with John Crow’s prophesy that we’ve come “… to create the garden that will one day flower here, despite the attempt of developers to turn it into three office blocks.” Back then it was simply a vision and a call to arms. Nine years later, the Crossbones Garden of Remembrance opened to the public.

Thanks to everyone who helped make it happen, to Jennifer who publicly envisioned the garden at a Vigil, and especially to the cast and crew of The Halloween of Crossbones – Michelle Watson, Niall McDevitt, Jahnet Rani Ji and Ground Control aka Katy Kaos. Poems from The Southwark Mysteries by John Constable. Recorded music by Mark Ominous. Produced by Martin Scooby.