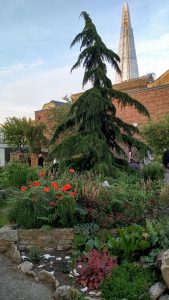 At a LB Southwark planning meeting on 15/06/2020, the planning application for Landmark Court (TfL land adjacent to Crossbones Graveyard) was granted.

The planning committee also granted a 30-year lease to Bankside Open Spaces Trust (BOST) for Crossbones Graveyard to be protected and maintained as a public garden of remembrance.

The existing garden will be enhanced in line with plans agreed last year following extensive consultations between the developers, BOST and a ‘Vision Group’ including many Friends of Crossbones.

Here are the main points of the planning decision as summarised by Helen John (Hej) of BOST:

“1. The lease is now inside the Landlord and Tenant Act 1954 which means that BOST now has a right to renew at the end of the 30 years lease term.
2. The landlord one year break clause proposed by TfL which in effect could have removed BOST after just one year, was removed at the request of the Council so BOST now has greater security of tenure.
3. The funding for the wardens and ongoing management is secure beyond the 6 month review period, allowing BOST to adequately fund maintenance and wardening on site.
4. The legal team at Southwark have agreed to review the Other Open Spaces proposed designation to give Crossbones stronger protection under planning law.
5. The restrictive covenant – an agreement requiring the landlord not to redevelop the burial ground – which is proposed for Crossbones will also be reviewed to provide stronger protection
6. The Section 106 agreement will also attempt to ensure that there is always at least 25 years on the lease term to help BOST secure funding for events, educational programmes, workshops etc.”

” Sadly, the 299 years, or the 70 years proposed by Councillor Noakes was rejected; this would have secured Crossbones Graveyard’s future more than any other legal document. The legal advice we’ve received is that although 299 years was not granted at committee, we should never stop asking for a longer lease from TfL.”

” We now move onto the next stage of our journey, which is to enhance Crossbones, raise its profile and educate people about its importance; this more than anything else will help to secure its future. So, on we go!”

” There is still also work to be done on the detailed design for the enhancement of Crossbones, in line with the planning application and BOST looks forward to continuing to work with the developer to achieve this. We’re very much hoping that landscape architect Luke Greysmith from Cookson & Tickner landscape architects, will still be working on the scheme and as soon as I have more information I’ll let you know.”

Thanks to Hej and the BOST team, to Lucy for speaking at the planning meeting, to members of the Crossbones Forum, to all of us who put in so much work on the Vision Group and in consultation with TfL and the developers, and to all Friends of Crossbones who have contributed to our 25-year campaign that is now bearing fruit.

When we began this long journey, many thought we were deluding ourselves by thinking we could save a piece of “derelict industrial land” with an estimated development value of £30 million!

Over the past 25 years Crossbones Graveyard has become a world-famous pilgrimage site, a shrine and a garden of remembrance dedicated to sex workers, outcasts and others who have been excluded or marginalised. Now, at last, its historical, cultural and spiritual significance is enshrined in law.