Monday 23rd July gather 6.45 for 7pm Vigil in the street by the red gates to Crossbones, Redcross Way

Our Vigil for the Outcast has been conducted at 7pm on the 23rd of every month since June 2004. We come to renew the shrine at the red gates, to remember all outcasts and outsiders, dead and alive, and to reclaim the secret history of Crossbones as revealed by The Goose to John Crow.

This months Vigil is traditionally our Isis-Magdalene Festival, honouring the Goddess Isis, whose festival in Ancient Egypt fell around this time, and St Mary Magdalene, whose feast day we celebrate at Crossbones on 22nd July (see ‘Blessing and Bards’). 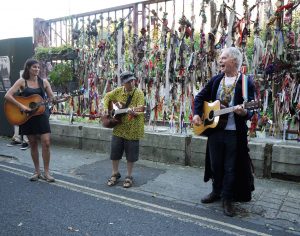 So although we’ll be celebrating her on Crossbones all of Sunday afternoon, we’ll be back in force on Monday evening to rock the party!

John Crow will conduct the Vigil, helped by the Friends of Crossbones – including YOU! As ever on 23rd July, expect to hear Crow and musician friends perform Dylan’s ‘Isis’, and a distribution of some free copies of BURNING ISSUE, Jonathan Harris’ magazine for radical money-burners – this issue includes a £23 note bearing the images of Crossbones, John Crow and Katy Kaos alongside the late sex worker and activist Laura Lee.

All this – and things as yet undreamed. Be there! And may The Goose be with us!