The 172nd consecutive Vigil, which has been held at the gates in Redcross Way on the 23rd of every single month since June 2004. Gather from 6.45pm to begin on the stroke of 7. 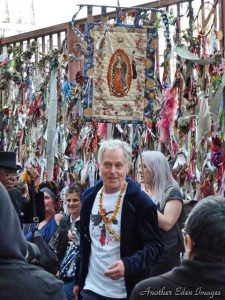 We come here to remember the outcast, dead and alive, to renew the shrine and to reclaim the secret history of Crossbones, as revealed by The Goose to John Crow in ‘The Southwark Mysteries’ and re-imagined by every Friend of Crossbones who comes to open the pathways.

These magical works underpin our creation of the Crossbones shrine and the Garden of Remembrance, and our campaign to protect Crossbones as a place of historical, cultural AND spiritual significance – as sacred ground to be protected in the face of the coming redevelopment of the adjoining ‘Landmark Court’ site.

John Crow conducts the rituals and performs his songs and poems from ‘The Southwark Mysteries’ – with words of wisdom from Jules, dedications to Goddess, creative acts of beauty to awaken all our senses and ‘moments in Eternity’ in which we stand in the heart of the city, in silence and in shining emptiness to light the pathways, allowing the sounds of the night to appear and vanish without trace.

This month also marks the Autumn Equinox, when day and night are in balance – an opportunity for us also to re-balance our lives, to let go of what we have lost or no longer need and to invite in the new.

Bring a ribbon, memento or totem to tie to the gates, and a poem, song or brief testimony to share with the spirits of Crossbones. Expect the unexpected!

‘you never know what you might find / you say that Southwark / is only a place / I say She’s a State of Mind.’