Gather from 6.45 to join the 171st consecutive Vigil, held at the gates in Redcross Way at 7pm on the 23rd of every single month since June 2004. 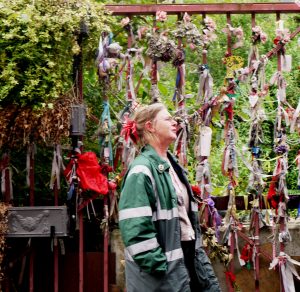 We come here to remember the outcast, dead and alive, to renew the shrine and to reclaim the secret history of Crossbones, as revealed by The Goose to John Crow and reimagined by every Friend of Crossbones who comes to open the pathways.These magical works underpin our creation of the Crossbones shrine and the Garden of Remembrance, which we’re still campaigning to protect and enhance in the face of the coming redevelopment of the adjoining ‘Landmark Court’ site.

For this month’s Vigil, Jennifer will be doing the honours. Please come support her, bringing a ribbon, memento or magical totem to tie to the gates, and/or a poem, song or short personal testimony to share when we offer our creativity to the spirits of Crossbones.

Expect the unexpected! At the last Vigil, on 23rd July, we had parents reading moving poems for their children who’d died tragically, a mystical Brazilian song sung to the memory of a friend who’d recently taken his own life, tales of The Magdalene, the singing of Isis (Dylan/Levy), everyone being scented by a musky, green scent by John Foley our Crossbones street perfumier, the free distribution of 23 copies of BURNING ISSUE magazine – and much more. Come amaze yourself!