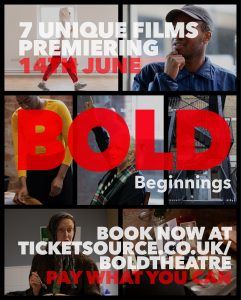 A new short film by John Constable, author of The Southwark Mysteries, commissioned for ‘BOLD beginnings’, a season of seven short films set at the Elephant and Castle. The season begins on Monday 14th June 2021.

Book at www.ticketsource.co.uk/boldtheatre – it’s pay what you can. The booking form fills in a suggested amount but you can change it before you need to pay anything – if you’re broke you can enter £0.00 and watch for free. If you book today (14th) you’ll get to see all 7 films, each of which is about 5 minutes long.

The producer and director is Sarah Davey, director of The Southwark Mysteries, productions in 2000 and 2010.

Sarah has just launched the new BOLD creative hub at Elephant and Castle.

The films will be released one at a time from Mon 14th through to the final film on Sunday 20th June. Bookers will receive a link to the different film in their inbox each day.

John’s film, CATCH MY DRIFT, is scheduled for Thursday 17th June, though the schedule could change at short notice.