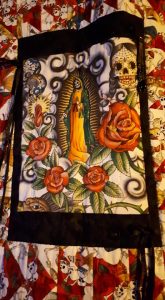 Thanks to our long-standing Friends of Crossbones and the many new supporters who gathered last night at Crossbones Gates for our Vigil for the Outcast / Halloween Portal. The 23rd October Vigil is also our Halloween Portal – when we gather under the banner of Santa Muerte to perform the rituals originally conducted during our magical cycle of 13 Halloweens, including the Reading of the Names of the Dead – those buried at Crossbones and our own lost loved ones. 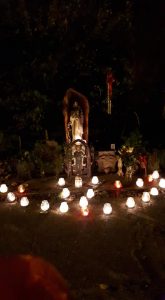 This ceremony was followed with songs, poems and meditations by John Crow, Michelle Watson, Tommy Calderbank, Jacqueline Durban, Mervyn Syna, Mark Juhan, Jerry and Jules. Big up Jennifer Cooper for her brilliant rendition of ‘Twilight of the Trade Marks’, showing the way for future participants in the Vigil to learn and perform one of the poems from ‘The Southwark Mysteries’ to incorporate the Goose and Crow spirits. Thanks for the powerful presence of Andy, Susanna, Maggie, Lana, Joanna, Jonathan, Elizabeth, Emma, Aileen and some bloods so new I don’t yet know their names. Sorry if I’ve missed someone. By the end, there were roughly 70 of us there and, as so often, I was a bit overwhelmed.

All this, with The Shard and a full moon rising over the Crossbones Gates as we faced the burial ground to deliver our unconditional blessing.