Thursday 23rd November 2017 – 7pm
gather 6.45pm to begin on the stroke of seven at Crossbones gates aka the shrine in Redcross Way, London SE1

The 162nd consecutive Crossbones Vigil for the outcast, dead and alive. This is also the 21st anniversary of the night The Goose revealed The Southwark Mysteries to John Crow. 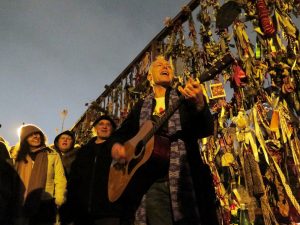 In recent months, many people have come forward to help hold the space and conducts some of the Vigils. This is most welcome as it makes the Vigils more sustainable.

Please bring a ribbon or memento to tie to the gates and thus help renew the shrine. You may also like to bring a poem, song or personal testimony, or anything else that would be good to share.