Wednesday 23rd October – gather 6.45 to begin on the stroke of 7pm, in the street by the shrine in Redcross Way, London SE1
Nearest tubes: Borough or London Bridge  (Borough High St. exit)

The 185th consecutive Vigil, held on the 23rd of every month since June 2004 – to remember the outcast, dead and alive, to renew the shrine at the gates, and to reclaim the Secret History of The Goose and Her Cross Bones Graveyard. 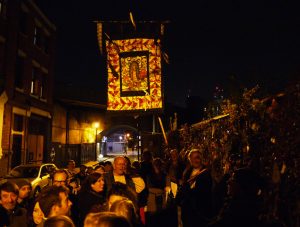 23rd October is also our ‘Halloween Portal‘ our own night of the dead, when we perform some of the rituals from the original ‘Halloween of Cross Bones’ (performed 1998-2010 and 2015-16). There’ll be group recitations of Goose and Crow incantations, and the reading of the Names of the Dead. Please get hold of some white ribbons and write on them the names and dates of your own lost loved ones – the names will be read out during the Vigil as the ribbons are tied to the gates.

After that, the 23rd November Vigil will be the last official Vigil to be conducted by me. This will mark the 23rd anniversary of the night (23rd November 1996) when The Goose revealed The Southwark Mysteries to John Crow at Cross Bones Graveyard. The Goose has commissioned me to seal my 23 years of active service with a performance of ‘The Book of The Goose’, assisted by two of our Goose Rhapsodes. There will also be a couple of surprise guest appearances. Please note that at this Vigil there will be no public offerings. 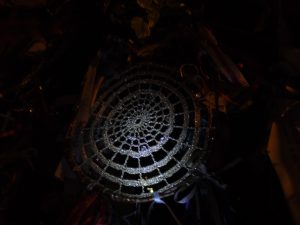 From 23rd December onwards, the Vigils will continue under the care of the new magical collective which has emerged to take the work forward. I’d like to thank them – Jennifer, Jules, Lucy, Hannah, Jacqui, Ross, Mark, John M. and Nicholas – and everyone else who’s helped deliver the Vigils and the wider magical works. Special, heartfelt thanks to Katy Kaos, who’s done so much behind the scenes to stage manage and make things happen – The Halloween of Crossbones, The Southwark Mysteries, the Vigils, the plaque, the planters, the dream-catchers, spiderwebs and the other crochet artworks on the gates,  and much more. Gratitude!