John Crow writes: Thank you, to the sixty or seventy incarnate beings who came to reinvigorate the Cross Bones Vigil with your magic. Although your Crow was still a bit frail, he was energised by The Goose and by the presence of each one of you, Friends of Crossbones old and new. 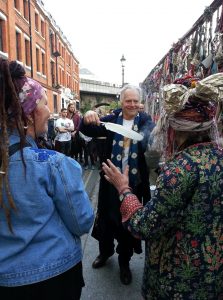 There were friends like Lisa, who was once a regular at the Vigils and who returned this evening after many years living in Canada, along with some who were here for the first time – and an American woman who’d come straight from the airport to be with us! Joanna spoke of her Cross Bones family, and of how we met twenty years ago at Green Angels just down the road from the graveyard, then gave a spirited situationist rendition of a poem. Jennifer delivered an emotional tribute to Crow’s work here, which she sealed with a powerful Goddess poem. Mark was an inspirational Goose Rhapsode, performing the part of Jesus “the outcast god” in ‘The Houses of Healing’ from ‘The Southwark Mysteries’. Jules told the story of an extraordinary British-Asian secret agent who broadcast undercover from Paris in 1943. Hannah delivered a poetic personal testimony on what connects her with Cross Bones. Tommy gave us a death poem by his friend Olive, which he dedicated to our friend Irving Rappaport who died two years ago this night. Danny (The Revd. Nemu) and I also remembered our friend Paul Carr, who died two nights ago – we said a Pai Nosso and an Ave Maria for him. Indian poet Mamta Sagar transported us with the music of her poem in the Kannada tongue. Then Michelle and I completed the offerings with a performance of the Tantric rites from ‘The Book of the Honest John’. 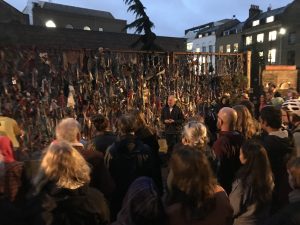 I conducted this Vigil, with stalwart help from Jennifer, John Morrow, Thomas and the other heroic Goose Samurai. Hannah held the light and Jennifer oversaw the tying of the ribbons. Tommy and Michelle helped me carry the altar there and home, with a lift from Jenn. Behind the scenes, Katy Kaos was a star. We were pleased to see other good friends like Ross, Emma, John Higgs, Susanna, Ian Blake, Dave 500, Dave and Nidge, Sophie and Leigh, Roz, Andy Lok, Katie from GIVE, Louise who saw my ‘Goose and Crow: Urban Magic’ talk at Breaking Convnetion, Zanna, and Lesley aka ‘Old Ted’ from the 2010 production of ‘The Southwark Mysteries’, who announced, to loud applause, that there is to be a 2020 revival! All in one, the night more than delivered on its promise of magic made manifest. Thank The Goose!