This radio feature could be heard coast-to-coast in the U.S. on Halloween 2017. It was recorded by Leo Hornuk during the 161st ‘Crossbones Vigil and Halloween Portal’ held at the red gates in Redcross Way, London, on 23rd October 2017

John Constable aka John Crow calls out Irving Rappaport’s name to begin the reading of the names of the dead as participants tie memorial ribbons to the gates.

Grant Burford, who co-created this website, died on 18th April 2017. His parents, Vernon and Terri, are at the vigil. Terri reads out Grant’s ribbon:

‘Grant Burford, Friend of the Outcast…’

The names of three of the recent dead, the magicians Steve Ash, David Blank and Steve Wilson are all called, though they’re not included in the radio report. And so many more, loved and lost. And not lost. Remembered. 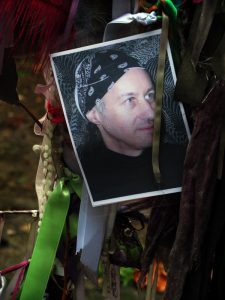 A few days ago, Katy Kaos and John Crow were in the garden tending the shrine when they heard a stranger in the street, reading from a memorial ribbon on the gates, saying Irving’s name out loud.

A recent visitor to the graveyard, Steve, reported seeing a ghost of a young woman, appearing and then vanishing behind a lamp-post.

And at the 23rd November Vigil, the ribbons fluttered in the breeze to remind us all that, here at Crossbones, there’s a time to bind and a time to loose…