Skip to content
Sunday October 31st 2021 (doors open 7.30pm; doors close 7.57pm)
A ritual concert in The Library of Avalon, Glastonbury
All Hallows Eve, Halloween, Samhain
Doors open: 7.30pm for pre-show with vibey drones.
NB the portal will close at 7.57pm when the show begins.
No late admissions. Please arrive in good time to relax and tune in.
Tickets £13. Places limited. Advance booking: https://www.eventbrite.com/…/ancestor-souls-tickets…
A limited number of paper tickets are on sale at The Speaking Tree bookshop. 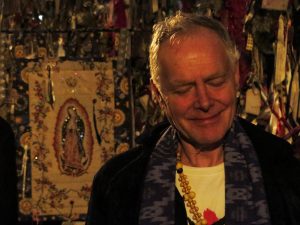 A ritual performance of astral music, spirit songs and incantations by Jenny Bliss Bennett, William Kraemer and John Crow Constable:
‘Here the veil between the worlds dissolves: the living, the dead,
share the brew, break the bread,
Ancestor souls, converse and commune,
this Samhain night, by the light of a bone-white moon.’
In August, Jenny and William recorded an improvised session with John in which he recited his magical verses as they sang and played. Together they wove an enchantment which sparked their creative relationship. This is their first full public performance.
Jenny Bliss Bennett is a singer and virtuoso multi-instrumentalist. William Kraemer is a versatile musician and synth-wizard. They regularly perform with their band Queen Space Baroque.
https://queenspacebaroque.com/
John Constable aka John Crow is a playwright, poet and performer, best known for The Southwark Mysteries (Oberon Books). His work has been performed in Shakespeare’s Globe, Southwark Cathedral, at international festivals and in many rituals performed at Cross Bones Graveyard. Tonight he’ll perform his Samhain incantations from The Halloween of Cross Bones and new work inspired by his first year living in Glastonbury.
http://crossbones.org.uk/john-constable/
Tickets for the live concert in Library of Avalon (£13) adavance booking here: https://www.eventbrite.com/…/ancestor-souls-tickets…
Tickets for the Online Live Stream (£4.99 or £3.99 early bird) available here:
https://www.facebook.com/events/1170932786767317