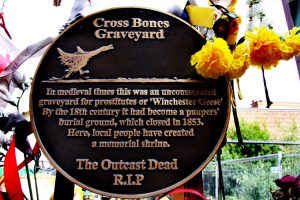 In the back streets of south London, a short walk from Shakespeare’s Globe, Southwark Cathedral and The Shard, is the site of an old burial ground with an extraordinary history. For centuries it was a paupers’ graveyard for the area formerly known as The Mint, one of London’s poorest and most violent slums.  According to local lore, it was once the final resting place for the Winchester Geese, medieval sex workers licensed by the Bishop of Winchester to work in the brothels of The Liberty of the Clink, which lay outside the law of the City of London. 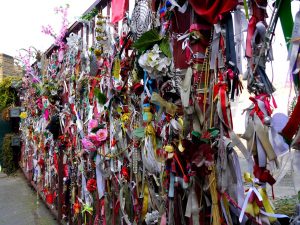 By the time it closed in 1853, Crossbones held the mortal remains of an estimated 15,000 paupers. The eastern part was dug up in the 1990s during work on the Jubilee Line Extension. In 1996, the writer John  Constable had a vision in which ‘The Goose’ revealed to ‘John Crow’ the secret history of Crossbones. This was the inspiration for The Southwark Mysteries – the epic cycle of poems, plays and esoteric lore performed in The Globe and the Cathedral – and informed the magical works at Crossbones: the creation of a shrine at the red iron gates in Redcross Way, dedicated to ‘the outcast dead’, and now a garden or remembrance.

From 1996 to 2019 John Constable (aka John Crow) and Katy Nicholls worked to reclaim and transform Cross Bones Graveyard – from a derelict industrial works site to a world-famous shrine and garden of remembrance, a sacred place and sanctuary in the heart of the city. In 2004 they founded the Friends of Crossbones, an informal network of sex workers, poets, activists, oddballs and outsiders of all kinds. On 23rd June 2004 they conducted the first Crossbones Vigil for the Outcast, which has been held at 7pm on the 23rd of every month since. 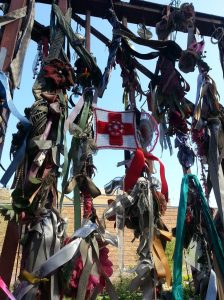 From 2006 to 2013 they worked with Andy Hulme the ‘Invisible Gardener’ to create a wild guerrilla garden with shrines, and from 2014 to 2019 with Bankside Open Spaces Trust (BOST) to open a public garden of remembrance.

Having completed a 23-year magical working with The Goose and her Outcast Dead, John conducted his last Vigil on 23rd November 2019. He and Katy now live in Glastonbury – and so are no longer involved in the management of the garden or organising the Vigils and other events at Cross Bones.  They work with The Goose to activate Her Vision of Cross Bones on the Astral – all part of the Unfolding of The Southwark Mysteries, the spiritual heart of the work in Eternity – of which the shrine and the garden are wondrous manifestations in Time.

The Goose is loose!

Likewise the Friends of Crossbones, having achieved their objectives, are each holding a light for Cross Bones in their own worlds. Some continue to observe the Vigils, gathering in the street by the shrine in Redcross Way at 7pm on the 23rd of every month. To varying degrees, they draw on the ritual forms revealed by The Goose to John Crow and used in the original Vigils. Others have used the simple rituals to conduct their own Vigils in their own homes and sacred places. To fully participate, or if you’d like to conduct a Vigil, please familiarise yourself with these rituals, which are included with the details for recent individual Vigils on the ‘Events’ page.

During 2021, at 7pm every 23rd, Jacqueline Durban has held a gathering on Zoom allowing people from all over the world to tune in wirh the Spirit of The Goose and Cross Bones.

This website is primarily a record of the works done at Cross Bones in the years 1996-2019 and of John Constable’s literary, dramatic and magical works – with regular updates on what’s happening at Cross Bones Graveyard. 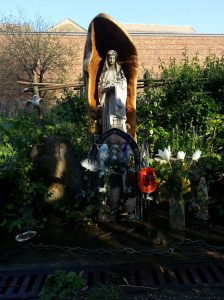 In 2020 planning permission for a major development on TfL land adjacent to Crossbones Graveyard was granted. This permission also granted a 30-year lease to Bankside Open Spaces Trust (BOST) for Crossbones Graveyard to be protected and maintained as a public garden of remembrance. The existing garden will be enhanced in line with plans agreed last year following extensive consultations between the developers, BOST and a ‘Vision Group’ including many Friends of Crossbones.  This website supports BOST in its stewardship of the Cross Bones Graveyard, trusting that it’ll respect and be guided by the vision of a DIY shrine and garden of remembrance for outcasts.

To influence the future of the Crossbones Garden by joining BOST workshops, to volunteer as a warden to keep it open, to inquire about opening times, and for other information relating to Crossbones Garden, please contact BOST: info@bost.org.uk tel: 020 7403 3393

For information on guided walks, talks, workshops, performances, The Southwark Mysteries and John Constable’s other work, please use the contact page on this website. 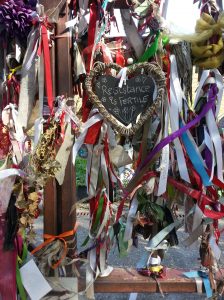 In memory of Grant Burford (9th November 1972 – 18th April 2017)
– with thanks for his invaluable help with creating this website.